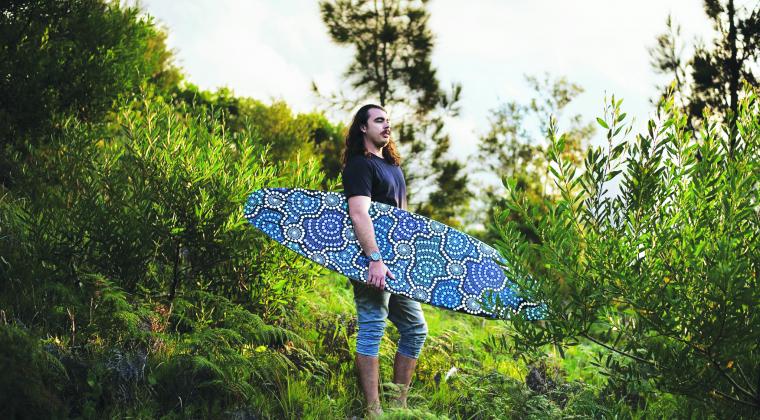 Water has never been far from the life and art of Zachary Bennett-Brook.

“The ocean has always played a vital role in my life as a surfer and growing up here in Wollongong nestled between the mountains and the sea,” says Zac, who produced the artwork used in GPT’s Stretch Reconciliation Action Plan (RAP) launched in February 2018.

“It’s just something that is engrained in me and that speaks a lot through my work, through the circular designs that have multiple meanings.

“One being the doppler effect where a water drop hits the water it flows out. The other representing a meeting place and traditionally would have been a campsite where you would come together to gather and share and gain knowledge.

“Now we have contemporary meeting places which are places like shopping centres, schools and community groups and for me the big one is the ocean,” says the artist of Torres Strait Islander heritage who was raised in Dharawal country (Wollongong).

“I can sit out there with my friends, where we tell stories, educate one another and connect to country,” says Zac of the ocean, where he regularly surfs.

Zac’s relationship with GPT started in 2017 when he painted a mural at Wollongong Central that recognised the local Dharawal people.

He says his work which features in the GPT’s current RAP depicts how the various properties owned and managed by GPT are based near bodies of water. “The design I did is very smooth and flowing, replicating the flow of water. The colours are water-based, with the blue representing the sky and sea,” he said.

Zac said the dots which feature in the work represent meeting places. “In this instance it draws on the fact that shopping centres and workplaces are big meeting places and that links into the properties that GPT owns,” he said. “In those places, people come from all different walks of life and backgrounds where they can connect.”

Ahead of National Reconciliation Week, Zac stresses importance of all Australians being involved in the reconciliation movement.

“For me, reconciliation is about acknowledging the past, what’s happened, but looking together towards the future.”

“Everyone working together to make change and I think it’s really important for both indigenous and non-indigenous people,” says Zac. “We’re all in this world together, we all breath the same air, let’s all work in harmony and create a better environment for all.”

Zac adds that the support of the organisations and corporations, through Reconciliation Action Plans, plays an important part in advancing reconciliation by helping providing employment to First Nations Australians and building a deeper level of understanding and respect between all Australians.

To learn more about Zac and his art, go to saltwaterdreamtime.com